Your first self-guided walking itinerary in Bordeaux in mid-autumn might give you the wrong impression, at least in the daytime. The neighborhoods just outside the core, and even some streets in the center, feel gray and gritty. But boy does this town come alive with light and color in its centre ville in the evening! I would highly recommend doing a few of your self-guided walking itineraries beginning at dusk and well into the evening.

Bordeaux is beautiful, but apparently north of that dividing line somewhere in the South of France that breaks the country into the pas cher South, and the tres cher rest of the country.

This town is expensive. See my comments on that at the bottom of the post.

Expensive, yes, but boy is it gorgeous, at least in the center. Sure it’s grimy in spots. What city isn’t?  And there’s construction in the places you most want to see intact.

It’s frustrating when the best sights are hidden behind construction shrouds and barriers. It happens all too often in too many cities. But that, mes amis, is the price of progress. Europe is old as hell, and sturctures need to be maintained for posterity. Otherwise all we’d have is ruins, and they get boring after a while.

My overall impression of Bordeaux is that it’s Paris Lite. Bordeaux is grand, but not grandiose, like Paris is. Don’t get me wrong. I love Paris’s grandiosity. The monumentalism of its architecture is startling and awesome. Bordeaux is a tad more homey. Just a tad. The Louis XV period stuff is pretentious, alright, but that’s what makes it so wonderful. It’s charming.

Ride the Red Tour Bus and Do the Papal Wave

So today, I did what I usually do first when I get to a bigger town. Ride the red tourist bus and do my impression of the Papal Wave to the pedestrians below. Try it yourself. It’s fun!

Is a tour bus kitschy? Heck yeah. But definitely the best way to get an overview of what a town is about quickly. And in this town, the ride is a relative bargain at just €13.50. That’s about US$15.

My assistant, Google, put together a little video of the day. Below I’ve addeed a map and a few photo shots from my evening walkabout.

Here’s the map of my Day 2 evening walkabout in Bordeaux. The numbers correspond with the photos below. The map is interactive. You can zoom in and out, and click on the numbers to see the Google photos of the location. Note all of them are correct however. My photos below are the real deal. Their numbers correspond with the map numbers. They too are clickable. Click on the photo once and zoom it. Click again and zoom in again.

The letters on the map are directional markers.  That was my route. You’ll probably have more fun just wandering around on your own and finding your own amazing spots, along with these!

Finally, a great noodle shop for cheap eats! Trying not to bust our $2000 per month budget any more than necessary in these more expensive towns is challenging. Seems the cheapest item on most dinner menus is €20, or US$23. But I found a great Japanese Noodle shop where I had a bowl of Tantanmen for €13.50, or just over $15.00.  It’s Point A (Photo 9) on this map.

Then of course, there’s always eating in.  I always look for a place that’s within a block or two of a grocery store. And I always eat breakfast and usually dinner in the apartment. You can make breakfast for a buck with a fresh baguette, and some fruit and cheese.

And good grief, make your own coffee! Most apartments have a coffee maker. Now, I’m a coffee maven and I like a good local cafe as much as anyone. And you can always find a good cup of capuccino in Europe for less than €2, and often for €1.50 in many of the places where we’ll be. So it’s ok to grab a cup while you’re out.

But as an American I like a big mug of Joe to start my day, and you’re not going to find that in European cafes. It would take 2 or 3 cafe Americanos to make one good old mug of the size we’re addicted to. Now we’re talking $30-$35 a week. Uh… no. That’s a waste. I hate waste!

So make your coffee in the apartment or hotel if they have a coffee maker. And I’ll let you in on a little secret. I brought my own 12 ounce moka pot from home. An extra strong 12 ouncer with a little bottled water added after it’s brewed will make a perfectly excellent 16 ounce mug of great coffee. Now I know most people don’t want to fuss with a moka pot. So just bring a 1 cup plastic cone coffee filter holder. They fit over your mug. If you know how to heat water to 200 degrees, you can make a great cup that way.

As for groceries, they are amazingly cheap in most of Europe, and especially so in southern Europe. The closer you are to the Mediterranean, the cheaper the food is. And the quality of the food here is outstanding. Even the convenience foods are great. None of that frozen processed crap we get at home. We don’t want to be bothering with cooking fancy meals. We just want healthy sustinence. You can get a great ready made meal for 4 to 6 euros from any of the plethora of chain grocery stores all over European cities. Or grab a sandwich if you are out and about.

Then you’ll have enough cash left over to go for a little fine dining once in a while and still stay within budget.

First Impression Was Ouch!  We’re Starting Out Way Over Budget

Yesterday, my first impression had been mixed, as I noted after I arrived and had my first walkabout on a chilly November evening. Here’s what I wrote then:

Now I’ve only been here since 6:30 PM tonight, and I haven’t seen much, but I checked the listings in a real estate office window and a couple of restaurant menus. Ouch.  If we want to say within my $2000 a month goal overall, I can’t make too many stops like this. We’ll have to find a way to economize.

My accomodations are the biggest problem for trying to stay under budget. At $57 per night, this is likely to be the most expensive place I’ll stay during the whole trip, other than the last night in a Paris hotel before flying home to Florida. And it fails to check all my boxes of what makes an accomodation, whether an apartment or a hotel room, a great place to stay.

I call those criteria the 5 C’s

Hit all 5 of those and you have a great place to stay. My apartment in Nice in the winter of 2018-19, checked off all those boxes. I could live in that place permanently, I loved it so much.

This place, meh… not so much. It meets the first 2 criteria. It meets the third on the basis of comparing with its local market. So it’s acceptable, but far from lovable. Would I stay in this apartment again? Only if I could not find something better. It’s functional, but comfortable and charming, it’s not. It’s well appointed and well maintained, so overall it gets a passing grade.

That said, if you’re not on as limited a budget as we are by our goal of staying in Europe for 200 days at $2000 a monthr, by all means, spend the extra cash to find a great place, rather than one that’s just acceptable. It makes the visit that much more enjoyable.

Spend Extra for Some Cities, Make It Up in Others

But some of us don’t have that luxury. We have to compromise. Here’s what’s important. I really, really wanted to see Bordeaux. So I made a compromise and got the best place I could find without blowing the lid off the budget. Yes, with transportation costs and food and other basic expenses I will go over budget this month. But I’m sure I’ll have a great time here.

And other places where you and I will be going along the way will make up for the extra cost of visiting a few places that are over budget. No question though, Bordeaux will extract a fine whine from your wallet.

Meanwhile, check out these shots of this charming city at night. It’s a start. I’ll add more here in the days’ ahead.

For more self guided itineraries try GPS My City-Bordeaux, or Google Travel-Bordeaux.

Meanwhile, I’ll be posting a few more itineraries in the next few days. Today, I have my real work to do! When I’m traveling, I always plan for an extra day in many places to take off from the fun stuff to do the work that pays the bills! 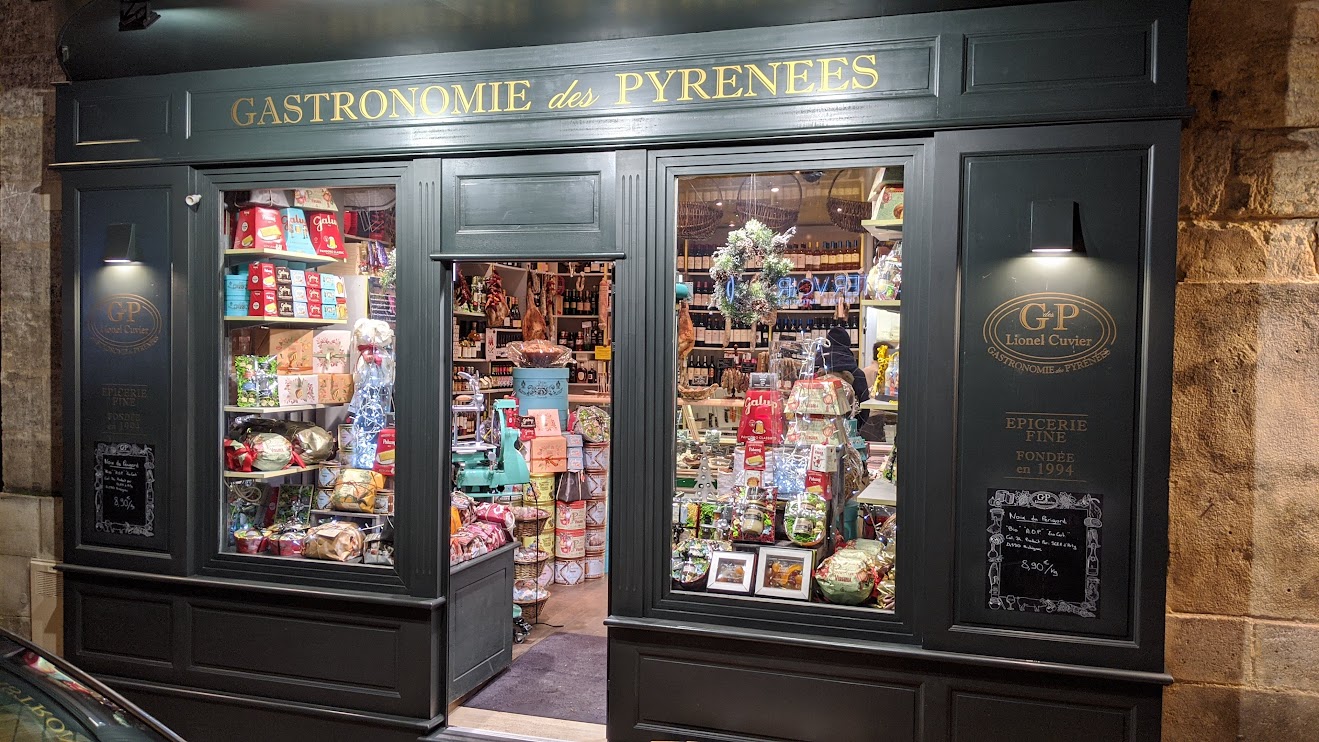 What to Do on a Rainy Saturday in Bordeaux?

Why, go to the food court of course! This is Les Halles de Bacalan, across the street from the Cite de Vin, museum of wine. I’m not sure what the architect was thinking, though.

Bordeaux Cite du Vin – What was the architect thinking?

More videos and photos of Bordeaux

First, the trip from Paris, and a jaunt around Bordeaux.

British food, French cooking!  A winning combo at any price, but my dinner was just €11.50. Chicken and mushroom pie. To die for!

Cheers! Now it’s on to Bilbao!